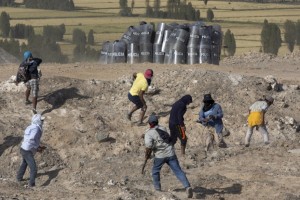 News reports accompanying this photo are quite sketchy but it only took a few sentences to set off all kinds of red alerts. These are farmers in Cocachacra, Peru battling with riot police defending the $1.4 billion Tia Maria open-pit copper mine project. The farmers, along with environmentalists, claim the mining operation will contaminate their fields, groundwater sources, & crops. Thousands of people in several cities in the region have actively opposed the project for years. Of course, you don’t know most of that information from the sketchy reports.

If you’ve been following the history of multinational mining projects in Peru, you know the government has fast-tracked environmental studies minimizing potential contamination precisely to attract more foreign investment. The plunder will mostly be taken out of the country but not without enriching the local oligarchs & their minions in the regime. One of the red alerts in the articles is that the Tia Maria mine is owned by Southern Peru Copper Corp. based in Arizona, & a subsidiary of Grupo Mexico.

The name Grupo Mexico might ring a bell because just last August in Cananea in the state of Sonora, Mexico (about 40 miles from the US border with Arizona), a mining spill considered the worst environmental disaster in Mexico’s history happened at the Buenavista del Cobre copper mine. The mine is owned by Grupo Mexico which runs its operations on the neoliberal business model of scorched earth.

In that mining spill, eleven million gallons (42 thousand cubic meters) of sulphuric acid, arsenic, cadmium, copper, chrome, & mercury were spilled into two rivers, contaminating the water supply for several municipalities (including the downstream capital city of Hermosillo with one million people); destroying the local ecology along the river & the livelihood of thousands of farmers; making the area uninhabitable for local flora, fauna, wildlife & for birds on a major north-south migration route.

The farmers & environmentalists aren’t talking through their hats. There is an entire history of open-pit copper mining just in the US which has left thousands of acres in Arizona, Montana, & Utah not just vast eyesores but have done massive environmental damage to fish & wildlife, water & air contamination, & created health & public safety problems for hundreds of thousands.

Peru, whose economy is warped by neoliberalism, depends on mining for 62 percent of its export earnings because it has bent over backwards with incentives to multinationals. Investment in mining last year based on those incentives amounted to $8.6 billion according to official figures. The country is now the world’s number three copper & number five gold producer. And you can bet your sweet boopie the oligarchs are raking in the dough for closing their eyes to environmental catastrophe. Short-range profiteering is one of the fatal flaws of the neoliberal business model.

The Peruvian elite is not going to let farmers & environmentalists scare off their gravy train with these protests & they have used considerable violence against them. Several farmers have already been killed. And that puts those farmers on the front lines (or rather one of the front lines) of the environmental struggles against neoliberal devastation of the planet.

Our fullest solidarity with their struggle.