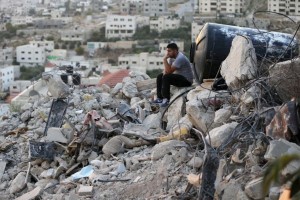 There’s something of a first in the Yahoo news caption to this photo. It said “A Palestinian man sits atop the rubble of a house which was destroyed by Israeli troops during an Israeli raid in the West Bank city of Jenin.” Imagine that! None of the usual modifiers like “according to witnesses” or suggestions evil fairies from outer space might have done it–but an outright assertion that Israel destroyed Palestinian homes. This was likely an oversight & not a change in editorial policy covering for Israeli human rights crimes.

The military assault of Jenin wasn’t on the city of Jenin but on the refugee camp with about 13,000 residents. The Israeli military entered the camp with tear gas, 40 military vehicles, & anti-tank grenades fired from rifles. They claim the target of the raid was a “senior Islamic Jihad official.”

Israel has long claimed the refugee camp is a center for all sorts of radical political activity. Well of course it is & thank heavens for that. What are Palestinians driven off their lands who’ve had their homes torched & bulldozed supposed to do? Watch soap operas all day!?

During the Second Intifada in 2002, the Israeli army entered the Jenin camp in a violent assault. The UN consequently cleared Israel of charges of a massacre of unarmed civilians because only 52 people died. How many civilian deaths does it take to constitute a massacre? More than 52? More than 100? Over a thousand? Let’s cut the crap.

Last summer, Israel troops shot up Jenin looking for the three Israeli teenagers who were kidnapped & murdered. Israel, without a shred of evidence, blamed it on Hamas & used it as a pretext to carpet bomb Gaza for 51 days.

That’s why international solidarity is so important & why we must build the hell out of the economic, cultural, & academic boycott of Israel. Demand no military aid to Israel. Demand Israel end the occupation of the West Bank & the blockade of Gaza.