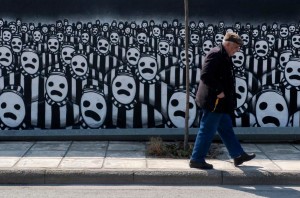 The graffiti behind the pedestrian is dedicated to the Jewish holocaust in Salonika (also known as Thessaloniki), a port on the Aegean Sea in northeastern Greece. The city, which is the second largest in Greece & a major economic, industrial, commercial, & political center, has a complex 2,300 year history covering the Roman, Byzantine, & Ottoman Empires.

In 1941, during WWII, the German Nazi army occupied Greece & began rounding up Jews for deportation on cattle cars to the Auschwitz-Birkenau death camps in Poland. They deported & exterminated an estimated 60,000 Jews. Very few escaped their dragnet.

Jews have a long history in Solonika, including a massive influx of Sephardic Jews from Spain to escape the Inquisition in the 15th century. It was a politically dynamic population that in the late 19th century, along with the rest of the world, began to become industrialized & a Jewish working class developed.

Under the leadership of a remarkable guy named Avraam Benaroya (b. 1887), a Bulgarian Jewish immigrant, they formed the Socialist Workers’ Federation in 1909 which became the strongest socialist party in the Ottoman Empire. Benaroya was a bone-deep internationalist who opposed Zionism which was very weak in Jewish politics at that time & opposed the First World War. He split from the socialist movement over their support for the war & helped form the Greek Communist Party. His tenure there didn’t last very long–apparently due to the Stalinizing regime of communist parties. He suffered exile, imprisonment, & survived a Nazi concentration camp.

He had an extraordinary, stressful, & complex political life & certainly deserves a biography. He was a stalwart opponent of antisemitism & every kind of nationalist chauvinism & oppression in the labor movement. There’s no indication he ever became a Zionist though he moved to Israel to retire in 1953 at the age of 66. He died in 1979 at the age of 92.

Jews in Salonika commemorate the holocaust which devastated their community. Regrettably Jewish politics there today are very much influenced by Zionism. We don’t let that stop us from taking a moment to honor those 60,000 people trucked like cattle to a horrific fate based on genocidal social hatred & to honor activists like Avraam Benaroya whose contributions should never be forgotten.