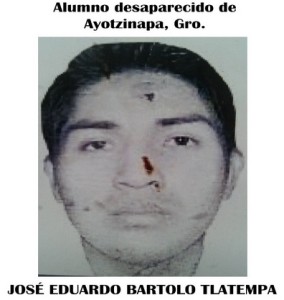 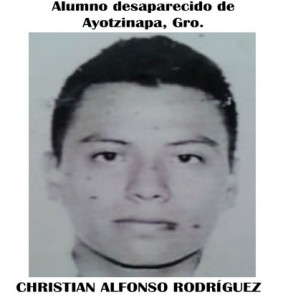 The families of these three young men among the 43 disappeared student teachers of Ayotzinapa in the Mexican state of Guerrero spoke today in McAllen,Texas. They’re on the first leg of a nationwide US tour to tell the truth about what happened to their beloved sons, to build solidarity & international pressure on the Mexican government to return their sons safely & as Jose’s mother said, “just as when they took them.”

The testimony of the three family members was powerful, direct, & very personal. They described that they are farmworkers in Mexico with children & a living to earn but were taking this time, despite fear of government reprisals, to fight for the return of their children. They believe & made a compelling case that their sons are still alive in one of Mexico’s clandestine prisons. They are not just expressing wishful thinking but have the assistance of an Argentine forensics team & six international experts on forced disappearances.

Their testimonies cut through the government lies reported in media & made it absolutely clear the Mexican military abducted their children at the behest of top state officials. They hold the governor of Guerrero & Mexican President Peña Nieto as guilty as the mayor of Iguala who may have ordered the hit & the military who carried it out. Mexican officials have piled lie on top of lie to deflect responsibility away from them. They claim corrupt municipal cops handed the 43 students to drug cartel thugs who killed them, incinerated their bodies, & dumped them in the river. The families tell a different story.

On September 26th 2014, the students were on a mission to raise donations in Iguala for an October 2nd trip to Mexico City–ironically to join the annual commemoration of the 1968 Tlatelolco police massacre of hundreds of protesting students. In a police assault on the Ayotzinapa bus, six students were murdered & many injured. One student had his face ripped off & was thrown to the side of the road; one was in a vegetative state & taken to the hospital “eventually.” The many injured sought medical help but the doctor who did not want to treat them phoned the municipal police who instead sent the military–the 27th Infantry Battalion of the Mexican army based in Iguala.

When the military arrived at the hospital, they confiscated cell phones from students (taunting them “If this is what you want, take it like a man”) & abducted them. Jose’s mother said she phoned her son’s cell several times on the morning of the 27th. The person answering said her son was detained. Officials of the 27th Battalion claim they witnessed the police attack but did not intervene. And the parents believe they are lying through their teeth.

Family & human rights protesters have held protests at the army garrison of the 27th Battalion but are being stonewalled by the military & the Peña Nieto regime. If they are ever to see their sons again the broadest international solidarity must be built & the families are determined to do that. Christian’s father said they have been invited to speak in Poland, Germany, & the Philippines, as they are presently on the US tour. If activists around the world cannot afford to finance a speaking tour they could consider holding forums using Skype.

“An injury to one is an injury to all” is a simple declaration but it is the iron law of social transformation. Disappearance is a human rights crime in over 30 countries including thousands of victims. The young men of Ayotzinapa were abducted because they were activists against social tyranny. We need to do what we can to help their families get them back.

(If anyone wants to contribute money for the tour, please let me know & I will give you contact info.)