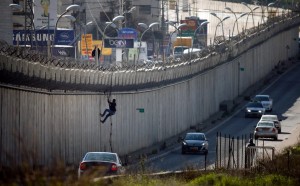 This is the Israeli apartheid wall. We could talk about the cost of maintaining the wall: $260 million a year. Or we could describe its physical characteristics: in some places, 2 meters/7 feet high of electrified razor wire; in other places 8 meters/26 feet high of concrete; & the cameras, radar, motion detectors, patrols, checkpoints, needed to control it. We could talk about how it cuts off Palestinians from their farmlands & from families & from access to businesses, hospitals, the Al-Aqsa mosque, cultural centers, & other services in Jerusalem.

But it’s more powerful to let the wall speak for itself. This is the wall at Al-Ram, West Bank which Palestinians scale over moving traffic to search for work in Israel.

When Israel began erecting the wall in April 2002, they claimed it was to protect against suicide bombers & as a deterrent to make terrorism more difficult. In fact, it has facilitated the barbarism of the illegal Israeli occupation of Palestinian lands & increased Israeli terrorism against Palestinians. It has enforced apartheid.

Israel is not a sanctuary from persecution of Jews; it is not the only democracy in the Middle East. It is an armed fortress against justice & against a democratic, secular state where Jews & Palestinians can live as brothers & sisters.

To dismantle the wall & Israeli apartheid, honor the economic & cultural boycott of Israel. Buy nothing with barcode beginning 729