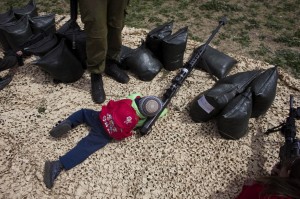 The state of Israel is an illegal construct (no matter how many UN resolutions attempt to legitimize it) & the Israeli people an invented people comprised of dozens of other nationalities. So political & religious traditions need to be manufactured for social cohesion & war propaganda.

Last Wednesday they celebrated the “Day of Remembrance for the Fallen Soldiers of Israel & Victims of Terrorism” (an ancient tradition by Israeli standards going back to 1963) & Thursday they celebrated Independence Day (a historic tradition going back to 1948 when Zionist paramilitary squads using terrorism & massacres thought they had decisively routed tens of thousands of indigenous Palestinians).

Since its inception as an illegitimate state, the high-flown rhetoric on “Independence Day” is a study in propaganda. In 1948, David Ben-Gurion (the Polish terrorist, Zionist leader, leading architect of Zionist aggression against Palestinians, founder of the Israeli state & military, & first prime minister) said: “A people which had been exiled from its homeland two thousand years before…was returning home as sovereign citizens in their own independent state.”

Ben-Gurion was a great champion of the Bible. We don’t know if he was a religious guy but he fully grasped the utility of a theocracy in Israel–especially for appeals to the Torah as a land grand from Yahweh. In the 1950s he said “I will never agree to the separation of religion from the State. I want the State to hold religion in the palm of its hand.” A real man of the Enlightenment! And the US which bankrolls this theocratic state is mobilizing against Islamic states!?

He was also a champion of “Hebrew culture” which existed only as German, Polish, US, Ukrainian, etc. Jewish culture & not as a universal culture. Israel had to create an Israeli culture because they are an invented people without a common culture & no history in Palestine that has any meaning except in the Bible & fevered Zionist imaginations.

Recent demographic studies of Israel indicate that a majority are not religious so it isn’t Judaism holding them together anymore. It’s the right-wing nationalism of Zionism along with evocations of past pogroms, persecutions, & the WWII holocaust. Only someone steeped in social hatred of Jews would minimize or trivialize the trauma of centuries of persecution. But Zionism is a rejection of the broader struggle against racism & colonialism involving millions of black & brown peoples across the planet; it is instead an attempt to cash in on the gestalt of colonialism.

Zionism isn’t working out as a social vision since after 67 years Israel, even backed by the US & Europe, is an armed military fortress with almost universal conscription. This little boy from a West Bank Zionist settlement is celebrating “Independence Day” playing soldier at a weapons display with the Israeli military. He’s practicing how to dehumanize & shoot Palestinians fighting against Israeli apartheid & ethnic cleansing. Raising small children in social hatred for Palestinians stands as the singular indictment of Zionism.

Build the economic & cultural boycott of Israel to tear down this fortress & replace it with a democratic secular state where Jews & Palestinians can stand united against racism & colonialism & live in peace as brothers & sisters. That’s the only social vision with a future.