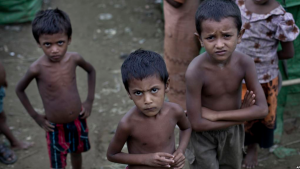 These little Rohingya kids were displaced by ethnic cleansing in Arakan state & forced into the Dar Paing concentration camp near Sittwe. The photo was taken in June 2014.

Take a look at the anger, anxiety, bewilderment on the faces of these little guys who are only six or seven years old. Their faces are as damning of ethnic cleansing in Myanmar as damnations get. These are kids & their birthright is the full scope of human happiness, not living in a concentration camp afraid for their lives.