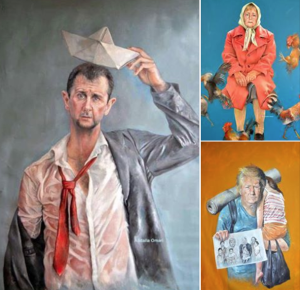 Abdalla Al Omari, a Syrian refugee artist living in Brussels, has created “The Vulnerability Series” of paintings showing world leaders like Trump, Putin, Merkel, Obama & others as homeless, powerless, & as refugees. He said: “My aim somehow shifted from an expression of anger to a more vivid desire of disarming these figures, to picture them outside their positions of power.”

Since Assad has created millions of refugees, Merkel negotiated the European Union’s anti-refugee policy with Turkey, & Trump is attempting to ban Muslims as refugees, their caricatures are posted as a wall of shame.

There is another preferable way to portray them: in prison uniforms after they’ve been prosecuted for crimes against humanity. 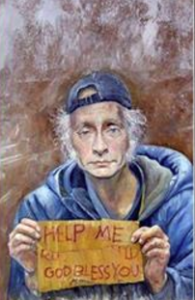