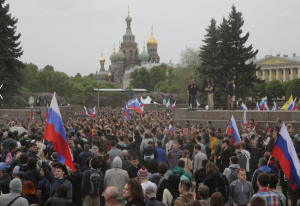 It could mean they protest oligarchic grand larceny–the very nature of capitalism–or it could mean the utter corruption of politicians. Lord knows, Russians have plenty to protest about, including massive restrictions on democratic & human rights & the billions spent sustaining Russian bombing & ground troops in Syria.

Media isn’t really reporting the political content of these protests but nobody comes out to confront Russian riot police just for the hell of it. It’s likely the leadership of these actions have ulterior motives & are intentionally vague in the demands raised but are tapping in to a deep reserve of opposition to the Putin regime.

There are those who will say it’s another regime-change operation. Write them off as a broken record.

This photo is “anti-corruption” protesters in St. Petersburg.