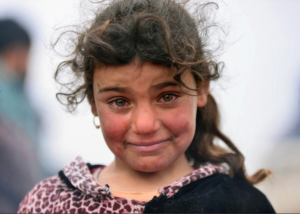 This little Iraqi girl cries as she flees Mosul where “bombs are falling like rain” from drone aircraft. ISIS & the US are both using drones over a civilian population so although media reports the carnage is caused by ISIS-launched drones, there are also reports of the damage done by US bombs. Both are turning Mosul into a killing field. It isn’t reported which country is supplying ISIS with drones but the US & Israel are the largest manufacturers & exporters.

There is no liberation from ISIS by US bombers. US out of Iraq & Syria.