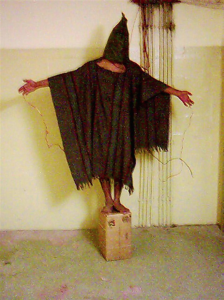 This video is of a man who claims to be the hooded man at Abu Ghraib prison in Iraq. This photo became the symbol of the CIA secret rendition (sending suspected “terrorists” to special prisons in countries without human rights protections, like Syria) & torture program. This fellow has been challenged publicly, claiming it isn’t him, but according to people like Alfred McCoy who wrote “A Question of Torture: CIA Interrogation, from the Cold War to the War on Terror” about the development of CIA torture procedures, this was a standard torture procedure which countless suspected “terrorists” were subjected to. Human Rights Watch & other investigators also report that many were tortured in this way. Here the man has electric wires attached only to his fingers but in other reported cases, electric wires were attached to fingers, toes, & penis. Several have claimed to be the man here, not because they’re lying but because they were indeed similarly tortured.

To refer to them as “suspected terrorists” is a mockery since the CIA torture program is so psychotic & depraved that it requires only being in the wrong place at the wrong time to be deemed suspect. The CIA claims they have ended this program but it can be said with absolute certainty that they have not & will not. The CIA is an institution that must be dismantled & its members prosecuted for human rights crimes. Some of the tortures which it is certain Afghans, Iraqis, & others still endure in those prisons include waterboarding, rectal feeding, sleeping naked on concrete floors, sleep deprivation, Russian Roulette with guns, being threatened with things like drills, threatening harm to detainees’ children & families, loud music & white noise bombardment. Many may recall reports from the Shah of Iran’s gulag where his SAVAK secret police agents learned these techniques from the CIA in the 1950s & notoriously employed them against political prisoners.

There has been no justice for these monstrous human rights crimes & there likely will be none. A legal suit by some of those tortured has been in the courts for years & will remain there tied up in legal formalities & maneuvers. The only real justice is the dismantling of the CIA & the prosecution of its members–some of whom now lead the US antiwar movement.