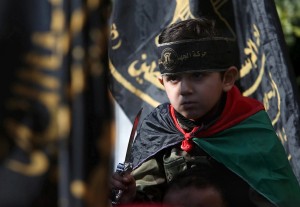 The caption to this photo in the Guardian-UK read, “Rafah, Gaza Strip: A Palestinian boy, carried on his father’s shoulders, holds a toy knife during a rally organized by the Islamic Jihad Movement in Palestine.” The photo is a subtle but pernicious piece of propaganda against Palestinian children playing on the hogwash about a “stabbing Intifada.”

Toy weapons manufacturing just in the US is a multi-billion dollar a year operation including guns shooting laser beams, fake bullets, & simulated machine gun fire. Toys simulating casual ways to blow up the world using nuclear explosions are flying off the shelves. It’s estimated that 83-percent of electronic games have violent themes & 58-percent are war games. It’s of course symptomatic of an aggressive culture derived from a government engaged in endless barbaric wars for well over one hundred years now. From the point of view of the Pentagon, it’s desirable that children who will grow up to be soldiers get inculcated with aggression & violence.

Zionist media has for a while portrayed the Islamic Jihad Movement as indoctrinating kindergartners in Gaza as terrorists & suicide bombers. And yet it’s as nothing compared to what kids around the world will get from watching “Star Wars: The Force Awakens” along with the attendant merchandizing of its toy arsenal & weapons of destruction. More importantly, it’s as nothing compared to the massive arming of US civilians carrying concealed & unconcealed weapons.

The difference of course is that the children of Gaza have been directly & repeatedly targeted in Israeli carpet bombing. One doesn’t have to agree with the politics of the Islamic Jihad Movement anymore than one does with the NRA or US Pentagon. But when the media portrays a small boy in Gaza in this way, it’s intended to portray Palestinian children as violent & justify targeting them for ethnic cleansing as they were in 2014. And that’s not reading too much into this photo.

Respond to this monstrous propaganda by honoring & building the economic, cultural, & academic boycott of Israel (barcode beginning with 729).