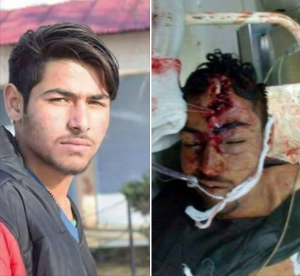 This is 18-year-old Sajad Hassan who was fatally shot in the head by Indian occupying soldiers this evening in Batamaloo, Srinagar, although Indian authorities claim there is no deployment of soldiers in the area. Interesting that claim, since there are countless videos of attacks by troops on protesters in the district. With 700,000 occupying troops in Kashmir, where aren’t they deployed?

Young Sajad was not participating in an anti-occupation protest but was executed walking down the road. He may have been walking home, going to visit a girlfriend or pals, or off to see a film. It doesn’t really matter to the occupying army who they shoot in Kashmir: unarmed protesters, stone-pelters, children in their homes, seniors standing near protests, young men walking down the road.
India may be trying to provoke & goad more young people into armed resistance so they can openly kill more & justify to the world the barbaric occupation of Kashmir.

We cannot bring back the life of this young man or all those executed just in the past several days. What we can do is actively stand with Kashmiri resistance to occupation by educating others & helping to build international solidarity with their struggle.

May Sajad Hussan Rest In Peace. Our deepest condolences to his family & friends. May his death not be in vain. Build international solidarity to strengthen & promote the emergence of an anti-occupation movement in India.

The photos are Sajad as he would like to be remembered & after he was declared dead.