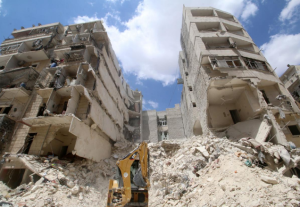 The dominant voices in a fragmented antiwar movement support Assad, support Russia & the other regimes intervening on Assad’s behalf, deny the Syrian uprising against Assad in 2011, & only oppose US military involvement, which they consider a regime-change operation.

There is a cacophony of divergent opinions, with some opposing Assad while calling for US intervention against his regime.Those have apparently missed the last 100 years of US military history. There are also those who are consistent antiwar, pro-Syrian democracy activists. To unravel all this, you almost have to make a mission out of it.

There are sources completely useless except for understanding Assadist analyses. Chief among them would be Global Research which has opposed the Syrian revolution against Assad since 2011. They also considered the Arab uprisings in Egypt & elsewhere to be orchestrated by the CIA & Mossad. They are straight-out, unapologetic libertarians in their analytical approach. Conspiracy thinking & speculations run rampant.

Counterpunch (CP) also publishes lots of rubbish on the issue, including Pepe Escobar. But they have also published articles by Joshua Frank, a CP editor, & by Ashley Smith from the ISO with lucid analyses from a consistent antiwar, pro-Syrian democracy point of view.

One can also follow the website of Alliance of Syrian & Iranian Socialists for antiwar, pro-Syrian democracy analyses: http://www.allianceofmesocialists.org/

This article titled “The Fate of Syria Under Assad” by Rohini Hensman is particularly cogent & clarifies why many antiwar activists, including myself, oppose Assad’s regime & demand he end the bombing of civilians; oppose all military intervention into Syria & demand the immediate withdrawal of all air & ground forces; & continue to support the democratic forces in opposition to Assad’s dictatorship.
https://www.sabrangindia.in/article/fate-syria-under-assad