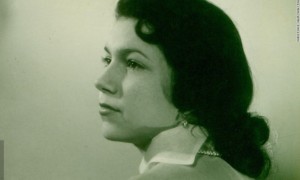 There was a special television report on the 1960 rape & murder in McAllen, Texas of Irene Garza by John Feit, a priest at her local church. Feit, now in his 80s & no longer a priest, is currently on trial here for her murder. The story is so much worse than has been generally reported & involves the social history of racism & segregation against those of Mexican ancestry.

In 1960, before the US civil rights movement, McAllen was completely segregated between whites & those of Mexican ancestry in housing & education. Her family lived in the Mexican-American district near the Sacred Heart church her family attended. (That church is now a center for providing assistance to mostly women & children Mexican & Central American immigrants.) Irene’s family encouraged their two daughters to defy restrictions imposed by segregation, particularly in education. Both girls became accomplished athletes & both attended college. She was a kind, unpretentious person who volunteered at a senior home to help the elderly do their hair for family visits & was a religious woman who attended weekly confession at Sacred Heart.

John Feit, the priest who murdered her, was assigned to Sacred Heart only 24 days after being found guilty of the attempted rape of a woman in another church (for which he paid a $500 fine but did not receive a jail term). Church authorities did not warn parishioners at Sacred Heart that Feit was dangerous & made no provisions to monitor him around women & children. When Irene went to him for confession, he persuaded her to move to the rectory where he tortured, raped & murdered her, later dumping her body in a canal.

The local police & Texas Rangers always knew he was their man but Catholic Church policy was to protect priests from criminal prosecution. The priests who served with Feit at Sacred Heart knew he was guilty but were under orders to lie for him. When police were unable to arrest him, church authorities moved him to a monastery in Missouri till things cooled down. The monastery knew they were protecting him from murder charges according to a monk who turned Feit in over 40 years later. When a priest from Sacred Heart & the monk, both eaten with guilt, came forward to McAllen police in about 2005, the district attorney refused to press charges saying the priest & monk were senile & not credible, & he sabotaged police efforts to get Feit (no longer a priest) prosecuted. No explanation was given for the DA’s criminal negligence but some possibilities come to mind, including collaboration with church officials. It wasn’t until a new district attorney was elected in 2014 that the Garza family was able to get the case reinvestigated. The McAllen police chief Victor Rodriquez played a major role in finally hauling in Feit from Arizona where he lived a respectable life as a father & grandfather.

Rape & murder of women & children is not just a personal crime. The case of this admirable young woman, who would be 83 years-old now, shows that these crimes against women & children are social & political forms of oppression. That is why they need to be politically addressed as such. Hopefully, a jury will find Feit guilty as charged & send his insolent, remorseless ass to jail for the rest of his life.