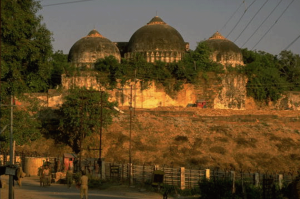 Today is the 25th commemoration of the destruction of the Babri Masjid in Ayodhya, Uttar Pradesh, India. The mosque was built in 1528-29 CE at the behest of the Mughal emperor Babur & demolished in 1992 as a result of Hindu nationalist campaigning claiming it was originally a Hindu religious site. It resonates in the worst ways with Zionist claims & assaults on Al Aqsa mosque compound in occupied East Jerusalem.

The Mughal Empire, ruled by a Muslim dynasty, covered most of the Indian subcontinent & parts of Afghanistan at its peak. I don’t pretend to any knowledge of the Mughal Empire, its historic period or how it came to be that Muslims went from ruling India to becoming subject to persecution & pogroms. The violent persecution of Muslims in India clearly makes that history important to study & understand.

This is a valuable article to begin that study. It’s titled “Too Painful To Remember Too Important To Forget” by Afreen Firdaus Idrees about the destruction of the mosque in 1992 & the violence it unleashed against Muslims, including her own family. Afreen is an Indian Muslim & a very cogent political writer, particularly on issues of Islamophobia, feminism, nationalism.

Photo is Babri Masjid before it was demolished.