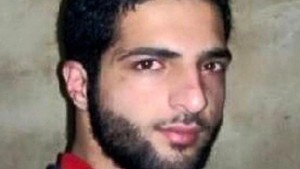 Burhan Wani, a 21-year-old Kashmiri militant, was shot dead on Friday by a joint operation of police & Indian paramilitary special forces. Two other activists were murdered with him–Masoom Ahmad Shah & Sartaj Ahmad Sheikh. Kashmiri human rights activists called their deaths extrajudicial killings because Indian occupying officials made no attempt to apprehend them before shooting them down.

Wani was considered a terrorist by the Indian government because he joined a guerrilla unit to fight for self-determination. He joined in 2010 at the age of 15 because he was humiliated & beaten up & his brother tortured & killed by army troops. Khurram Parvez, a leading human rights activist & director of Jammu Kashmir Coalition for Civil Society (JKCCS) in Srinagar, said that is why Kashmiri’s identify so strongly with him.

Despite India’s portrayal of Wani as a violent terrorist, there is no indication he ever carried out any guerrilla operations against the Indian occupation but he was well-known to Indian authorities for creating a video presence on social media to attract other Kashmiri youth to guerrilla politics. In the past four months, several participants in the videos have been hunted down & killed.

One doesn’t have to agree with guerrilla politics to honor Wani. He committed his life to opposing the occupation & to fighting for self-determination & that is what Kashmiris by the tens of thousands honor him for, as should those who stand in international solidarity with Kashmiri self-determination.

Funerals for people living under occupation are political events so Indian authorities knew the murder of Wani would provoke massive outrage. They began by instituting a curfew to prevent Kashmiris from attending his funeral on Saturday. Indian media reported 20,000 ignored the curfew to attend the funeral but images would suggest it was at least ten times that & so large that funeral rituals had to be performed more than once to accommodate the number of mourners.

When tens of thousands defied the curfew, police & military forces “unleashed terror on the mourners & protesters” according to the JKCCS. Police & armed forces used pellet guns, tear gas, & live ammunition on unarmed protesters; they assaulted protesters with batons, including beating women; they vandalized ambulances taking injured to hospital & assaulted the patients & medical staff; they went on the rampage against patients & medical staff inside the hospitals.

Several protesters have already died & there are growing numbers of injured suffering from bullet wounds, pellet injuries, physical assault. Some of the patients are women, many are minors. According to the JKCCS “The police & armed forces appear to have free hand to kill, injure, torture & destroy property” & are engaging in “absolute lawlessness” with impunity.

India has instituted an internet ban which is likely to be in force for several days. In the meanwhile, Kashmiris working outside the country are providing all the information they can obtain. We must stand with the people of Kashmir & speak out to condemn this siege & the occupation by educating on social media, writing protests to Indian embassies, & rallying at Indian embassies where that is possible.

The photo is Burhan Wani. We honor him as a freedom fighter. May he Rest In Peace.