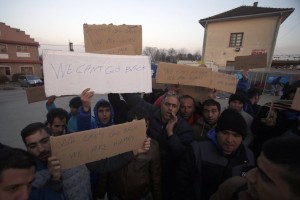 These are refugees protesting last Wednesday at a train station in Sid, Serbia. More than 200 have been camping there since being sent back to Serbia from Croatia because of “tightened rules for migrants seeking entry into the European Union.”

Media seems to be exercising discretion about what conditions those “tightened rules” impose on refugees. Such discretion represents deceit & unwillingness to disclose the full extent of EU violations of international law governing treatment of refugees.

So far, we know Denmark & Switzerland have legalized stealing the property of refugees when they apply for asylum; those granted asylum in Germany will be blocked for two years from bringing their families to join them; Germany has designated Algeria, Morocco, & Tunisia as “safe countries of origin” & refugees from those countries will be denied asylum, though they are also denying asylum to Iraqis coming from a US war zone; Sweden, Norway, & Finland announced they will deport tens of thousands of asylum seekers. In all of the EU countries, those who do not leave voluntarily will be deported.

The unstated part of these new “tightened rules” is a news blackout so the world doesn’t know the full extent of the criminality–most importantly, the number of refugees who continue to drown crossing the Mediterranean despite NATO & FRONTEX naval fleets prowling the entire sea. According to the International Organization for Migration (an intergovernmental agency), nearly 4,000 people drowned last year. The IOM also reports that so far in 2016, 321 have died on the Turkey to Greece route & 90 have died crossing from north Africa to Italy & Spain. Their figures don’t correspond to those from the UN refugee agency (UNHCR) & it’s likely both are underestimates of the number who have died. There can be no overestimation of the amount of human suffering being inflicted by EU immigration & refugee policies.

Imagine that refugees fleeing war zones & massive bombing have to stand behind razor wire barricades with signs saying “We can’t go back. We are human”? No one who came of age politically in the post WWII period of anti-colonial & civil rights struggles ever anticipated that the gains of those momentous struggles would be reversed so dramatically. It is the historic imperative of our period to again stand together against the advance of barbarism. That means rebuilding the international antiwar movement & demanding immigration as a human right. Open the damn borders.