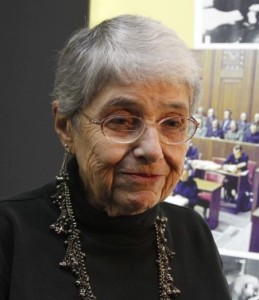 Hedy Epstein, a 91-year-old Jewish holocaust survivor, was invited & slated to be honored by the Austrian parliament at a March event titled “In Grandmother’s Words…The Fate of Women in the Second World War”.

Epstein fled persecution in Germany in 1939 at the age of 15 & eventually ended up living in the US, including NYC, Minneapolis, & now St. Louis, Missouri. She is a long-time activist for affordable housing, reproductive rights, anti-war, & was arrested in St. Louis protesting in solidarity with the Black community of Ferguson after the murder of Michael Brown in 2014. She became a supporter of Palestinian rights in 1982 after the massacres at the Sabra & Shatila Palestinian refugee camps in Lebanon which the Israeli military was involved in. She is an active member of Palestinian solidarity as a speaker & an agitator–as an anti-Zionist who rejects a Jewish-only state & promotes a democratic secular state; supports the economic & cultural boycott (BDS) of Israel; & she was a participant in the 2011 Gaza Freedom Flotilla to break Israel’s naval blockade of Gaza & deliver humanitarian aid & solidarity.

Zionist organizations absolutely disgraced themselves in a maelstrom of flatulent objections to get Epstein disinvited. The chief Nazi hunter from the Simon Wiesenthal Center said Epstein “is not a survivor in the classical sense.” A Zionist professor from Indiana University said she “likes garnering public attention as a ‘survivor,’ although whether she is one is debatable.” The same jamoke once wrote Epstein was part of the “moral emptiness of Holocaust survivors who took on Israel.”

The Jerusalem Post, a rightwing Zionist publication, apparently interviewed Epstein by phone & tried to reignite previous controversies they’ve lit up around her. They queried if she likened Israel to the Nazis & if she opposed the EU & US designations of Hamas as a terrorist organization. Only a halfwit would try to make chopped liver out of someone who’s been a political activist most of her adult life. She answered that Israel & Nazi Germany have similarities but she refused to make direct comparisons; she answered that Hamas was democratically elected. When asked about Hamas rocket attacks on Israel, she answered “Hamas has a right to defend themselves.”

It’s of course an outrage that the Austrian parliament folded without even putting up a fight but it really isn’t the appropriate venue to honor a person of the political stature & dignity of Hedy Epstein. The Austrian government has set limits on the number of refugees it will allow to enter the country; it’s using the army to stop refugees from transiting through to Germany; it’s busing refugees back to the border & stepping up deportations; it’s offering refugees chump change to go home (€500); & it’s urging Austrians to create vigilante militias to patrol the border against refugees.

Hedy Epstein is a remarkable, tough-minded woman who does not rely on honorifics to do the right thing. She’ll put the affront behind her by dinnertime tonight. But we should take a moment to honor her & to let her know those who stand with refugees, with Palestinians & against Israeli apartheid, for women’s rights, Black civil rights, against war, consider her one of our most honored & respected teachers. May she inspire all of us to live as admirably as she does. May her life be long.

(Photo of Hedy Epstein from Reuters)