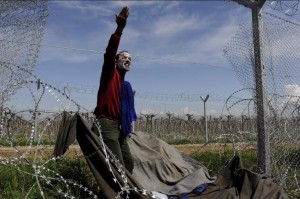 Has the European Union completely lost its mind? Because it is demonstrating in so many ways–austerity programs in Europe, support for Israeli apartheid, & savagery toward war refugees–that it is in institutional free-fall into hell. It hasn’t been around that long. It’s time to make it go away. Their anti-social, violent policies expose what happens when institutions are set up to serve private plunder at the expense of human needs.

Take a look at this photo of refugees protesting on the Greek-Macedonia border where hundreds of distraught, hungry, cold, miserable & desperate refugees tried to storm the razor wire border fence. Macedonian police, who are enforcing EU policies, tried to repel them by coming at them with tear gas, stun grenades, plastic bullets, & a water cannon. A military arsenal against war-traumatized, unarmed people.

Greek police stood on their side of the border with their fingers stuck up their noses, doing nothing. Actually, what could they do? What would they do when they are also enforcing EU policies & will soon be forcibly deporting the refugees back to Turkey from whence they did not come!? Deporting refugees is no solution to the crisis but that is all the morally blunted & politically bankrupt officials of the EU can imagine because working people don’t count more than bankers & corporate profits.

A few weeks ago, Medicins Sans Frontieres (Doctors Without Borders) announced they were leaving the camps due to security concerns for their personnel–likely concerns of assault by police more than by beleaguered refugees. They must have stuck around since one of their field coordinators reported they treated about 300 people, including 30 with rubber bullet injuries, at their field clinic. Three of those were children with head injuries caused by rubber bullets.

Again the question: has the European Union completely lost its mind? How long does it seriously believe it can violently hold off tens of thousands of refugees living in field tents? How many does it think it can deport? The more important question: how long are we going to put up with their savageries?

This refugee is standing by a section of the border fence taken down by protesters. They won’t get very far against violence without the big battalions of international solidarity demanding: Immigration is a human right. Open the damn borders.