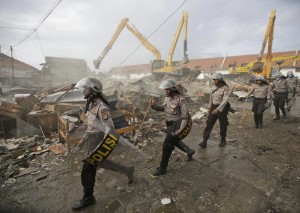 Yesterday, the government of Jakarta, Indonesia, moved in heavy equipment & 4,000 police & military officers to evict residents & demolish nearly 600 houses in a local slum where many residents had lived over 20 to 40 years. The slum was on public lands in the harbor front area of north Jakarta called Luar Batang, in a fish market area called Pasar Ikan.

The Jakarta government has forcibly bulldozed several slums in the past months as part of the same neoliberal process happening on every continent. Thousands, if not the majority, of urban slum residents were farmers & farm workers dispossessed & displaced by multinational agribusiness enterprises who destroy sustainable agriculture & establish plantations usually based on mono-crop economics. In Indonesia, that has meant a violent conflict between farmers & government troops enforcing land grabs for palm oil plantations. The process is the same on every continent, especially affecting indigenous peoples’ rights. But it has met most violent resistance in places like Brazil, Peru, India, Uganda, the Philippines, Nepal, Cambodia, Indonesia.

That dispossession is what is driving the massive refugee crises from those regions both into urban slums & to other countries for work. The conflict with farmers in Indonesia has gotten little news coverage; the catastrophe of what deforestation for palm oil plantations has done to orangutans has received some coverage; how deforestation has created climate change & massive flooding in Indonesia has received almost no coverage. But it’s all of a piece with neoliberal plunder & the growth of urban slums.

Another part of the neoliberal process is razing the slums that became havens for dispossessed farmers, many of whom are from indigenous tribes. Squatting settlements were often built on public lands which the IMF & World Bank are now demanding be privatized for development. It’s an ubiquitous, international process played out with relentless aggression & uniformity.

Just like everywhere else, the Jakarta waterfront area is being reclaimed for development as a tourist area since it’s a waterfront & the Luar Batang Mosque, one of the oldest mosques in Jakarta, is located in Pasar Ikan. The historic mosque already receives thousands of visitors every year. The government is razing several slums in the coastal area to develop twelve different tourist areas including a sports stadium, maritime museum, golfing, shopping malls, nightlife, & amusement parks. The IMF & World Bank are turning the countrysides into plantations & the cities into amusement parks for the well-heeled, all at the expense of working people & turning them into paupers.

Residents of Luar Batang resisted the evictions & demolitions but just like everywhere else they were met with tear gas & truncheons. Evicted residents were not offered compensation; some were offered low-cost housing elsewhere but many say they cannot afford rent & others say they found the apartments occupied when they tried to move in their possessions.

It looks like the IMF & World Bank are arch-villains in the neoliberal scheme of things. Their tenure & tyranny on this planet have run their course. Time to take them out & establish institutions that serve human needs & not private plunder.

Housing is a human right. No if, ands, or buts.