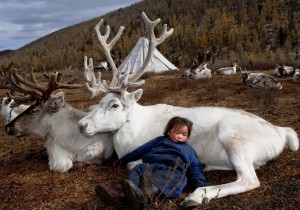 This is a Duhalar child sleeping on the reindeer as her mother milks the herd nearby. Duhalars, who live in northern Mongolia along the Siberian border, are among the last nomadic reindeer herders in the world. They depend on reindeer not only for milk & transportation but also their shamanic spirituality. They are seldom eaten.

There are only about 40 Duhalar families remaining, about 200 to 400 people. The reindeer population has also decreased. This isn’t some sort of Darwinian extinction but bungled social policy by the Soviet Union which interfered with Duhalar tradition, forcing many young to move elsewhere. In the 1970s, the USSR halted the nomadic lifestyle, put reindeer under state control, & forced Duhalars into fishing & hunting collectives. That might qualify more as railroading than interference. The state also began harvesting reindeer antlers to supply the Chinese medicine market which is when the reindeer population declined.

When the USSR collapsed in 1991, the state had no money to pay the collective workers so the reindeer were handed back to them & they returned to the nomadic way of life. The loss of traditional herding knowledge took a toll on those remaining & many reindeer were lost to disease.

Much of their income today is from tourism & likely from putting up the anthropologists who come to scrutinize & document their demise.

Would that the tender relationship between child & deer prevailed in the larger world & bureaucrats would leave the Duhalars alone.