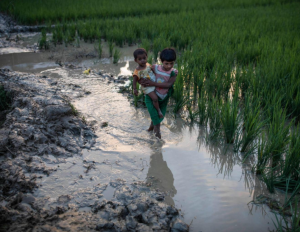 The thousands of unaccompanied Rohingya children crossing into Bangladesh are an urgent humanitarian & child welfare concern. Most of them lost parents in the genocide & are grieving as well as traumatized by being hunted like animals by military & nationalist death squads. During such crises, predators & traffickers come out from under their rocks to sell them & to pipeline them to sex & labor traffickers. The traffickers pose as members of a charitable foundation, as relatives or foster parents & gullible or corrupt officials let them walk off with thousands of kids. Some human beings can only be described as scum. This was an issue for children orphaned in the 2004 tsunami in Sri Lanka & Indonesia & is still an issue for African child refugees processed by immigration in Italy. One estimate a few years ago is that over 10,000 African children had gone missing after being processed. There is still no accounting of their whereabouts.

We have to demand that humanitarian aid & personnel vetted up to their eyeballs be immediately provided to Rohingya children so that they are protected from traffickers & find save haven. We have to demand the immediate reimposition of human rights sanctions against the Burmese government that has wrenched these children’s lives apart.