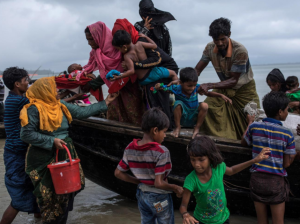 Many photos are emerging of Rohingya refugees scrambling for food, even fighting each other as aid agencies hand it out from trucks. Others show long lines of refugees waiting to receive small portions of rice & water. There’s something so insensitive, so wrong in showing them in such a state. There are now 410,000 new traumatized refugees who have fled for their lives on foot hunted by death squads & in the rain. They arrive in Bangladesh with their elderly, infirm, small children, many with life-threatening injuries, infections, bullet wounds. It’s raining in Bangladesh & there aren’t tents set up for shelter. The kids are crying & the elderly, sick, & injured are in desperate need of food & medical care. Of course they’re scrambling for food & water. They’re trying to keep their beloved alive.

The indignity here is that humanitarian aid agencies, including the UN, are not delivering in an organized way because they claim the Bangladeshi government is obstructing them–although such obstructions have not stopped the Sikh teams from Khalsa Aid from doing so. The Bangladeshi government may be overwhelmed but it should be demanding other governments around the world fly massive humanitarian aid in within the next few hours, including field hospitals, shelters, clean water, & food. They need to include vetted personnel to provide security & care for the thousands of unaccompanied children who lost parents in the genocide & are now in grave danger.

We should be demanding our own governments provide humanitarian aid & right along with that we should demand the immediate reimposition of human rights sanctions against the Burmese government. Standing with the Rohingya against genocide means confronting the collusion of our own governments turning a blind eye & continuing to pump in billions of dollars of investments to the junta.