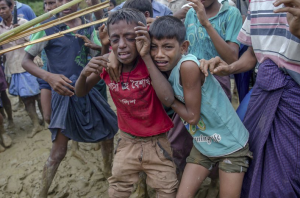 There’s a crisis in the delivery of humanitarian aid to Rohingya refugees that we need to make an international hue & cry about. The NY Times, in an article on September 29th, noted that these organizations are operating in Bangladesh: UNICEF, Save The Children, Doctors Without Borders, World Food Program, the International Rescue Committee (IRC). Parenthetically, but not irrelevantly, it might be mentioned that IRC is Kissinger’s operation. The Board of Directors includes Kissinger, Madeleine Albright, Condoleezza Rice, Colin Powell, magnates from JP Morgan Chase, Bank of America, Goldman Sachs, including Felix Rohatyn (who presided over the dismantling of social services in NYC during the 1970s) & James Wolfensohn (past president of the World Bank dismantling social services on several continents). The IRC does not really do humanitarian aid; it’s engaged in something entirely different.

We know there are other smaller operations like Khalsa Aid providing aid on the ground; there is apparently even a truckload of Chinese aid. But we need to know why most reports are about the refugees still starving, sick, living without shelter in the rainy season. Are there logistical problems in getting supplies to 500,000 refugees? Not any more than there are when they conduct their wars & occupations & set up entire military operations within days. What’s so hard about flying in tons of food from all over the world? That’s how they provide for their armies. Are there at least port-au-potties set up so people don’t have to poop on the ground & create major health problems like cholera? What about field hospitals where those with bullet, machete, knife, & other injuries & infections can be treated?

This photo from a couple weeks ago is little Rohingya boys who haven’t eaten for days & are starving being beaten back with bamboo sticks from a food distribution site. What kind of humanitarian aid operation thinks assaulting traumatized children is their right for handing out a few dry biscuits?

We don’t just have a humanitarian crisis on our hands. We have a criminal conspiracy to treat the Rohingya people like fleeing terrorists, like they aren’t human beings. Our demand should be that our governments provide immediate, massive assistance of every kind to the refugees, no excuses allowed. This isn’t a Muslim issue; it’s a human rights issue that affects all of us.