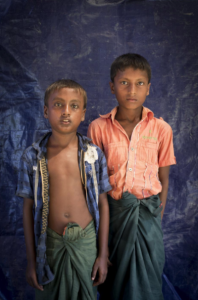 Two Rohingya refugee boys in Bangladesh: just so we don’t get lost in all that “geopolitical” rubbish about ARSA, pipelines to China, what Suu Kyi can & cannot do to stop genocide. Just two little guys who wanted to have a childhood in their own hometown but were forced to flee for their lives.

These two brothers watched their family being massacred from across the river. They watched as attackers executed their father & other men in the village, then take their mother & three siblings to a house which was set on fire.

Stand with the Rohingya people against genocide & for human, democratic, civil, & refugee rights.