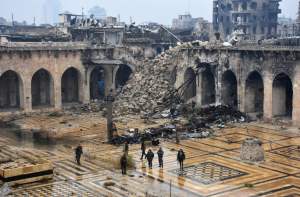 It is so deeply disturbing to read the posts of Assadists celebrating the “liberation” of east Aleppo. It’s difficult to characterize their politics because they posture & truly believe themselves to be humanitarian. But their absolute disregard for the lives of Syrian civilians sustaining unspeakable trauma is bone-chilling.

East Aleppo has endured over five years of carpet bombing with barrel bombs filled with chlorine; are without food & water or medical care & have lived underground for years. Now they are being evacuated to uncertain fate at the hands of the Assad regime, with reports the men will be forcibly conscripted, executed, or sent to Assad’s notorious gulag.

Any documentation of all this, no matter how compelling, is mocked by Assadists as fake news–especially videos & testimony of terrified civilians in east Aleppo. They laugh heartily at the claim by Assad officials that the White Helmets were nowhere to be found in east Aleppo & were only a media invention. They scoff at fears expressed by Syrians of retribution by the Syrian Army & hail that army as freedom fighters. They hold nothing sacred, including war-traumatized children, the elderly, infirm, disabled, & defenseless waiting for the apocalypse to arrive. The entire horror faced by civilians in Aleppo is all just material for mockery, scorn, contempt, & a bone-deep racism.

One Assadist called Assad “beloved” & wrote “Ode to Joy” on the liberation of Aleppo: “Syria, Mother of civilization, Beethoven applauds you. Friedrich Schiller applauds you. Humanity applauds you.” If that isn’t evocative of the Reichstag, then it’s a symptom of mental derangement.

Meanwhile Fares Shehabi, the Assad official governing Aleppo, has repeatedly posted on his social media pages that “Our revenge has just begun” & boasted that “more than 726 Saudi jihadi pigs (were) killed in Aleppo under the NATO label of moderate Syrian rebel.” He’s playing his Assadist disciples like a fiddle.

This is a photo of Syrian soldiers near the ancient Umayyad mosque in the old city of Aleppo. Even if you support the Assad dictatorship, does it seem appropriate to be mocking, scoffing, laughing, & applauding this kind of destruction? Even Robert Fisk who shares the racism of other Assadists toward Arabs & Muslims expressed concern about the destruction of ancient architectural treasures.