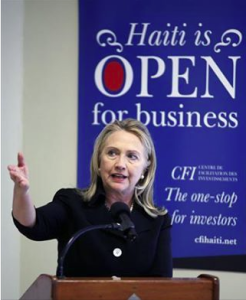 NBC news reported Clinton’s criticisms abouf Drumpf’s use of overseas sweatshops to make his clothing lines. Her righteousness doesn’t have a leg to stand on. Out of the many detestable acts by Clinton during her tenure as Secretary of State is how she & Bill Clinton implemented Obama’s policy of turning post-hurricane Haiti into a sweatshop haven & in the process sucked millions of dollars into their personal & foundation coffers.

Neoliberal capitalism is based on sweatshop economics & this shyster politician has made sure to enrich herself off the backs of millions of primarily women & children workers.

This was originally posted in October 2012. It’s only the tip of the iceberg of her profound corruption.

Haiti is open for plunder! Both of the Clintons joined Haitian president, Michel Martelly–along with a glamorous entourage of movie stars Sean Penn, Maria Bello, & Ben Stiller, fashion designer Donna Karan, model Petra Nemcova, British flyboy Richard Branson, USAID & State Department functionaries, bankers from the Inter-American Development Bank (IDB) & other investors–in the opening ceremony of the $300 million Caracol Industrial Park in northern, rural Haiti. According to media flattery, the work of both Clintons in Haiti–in particular this industrial park–will shape their political legacy. Damn straight it will! It already earns them a special place in hell & merits them a special tribunal for human rights crimes against the people of Haiti. But loathsome as the Clintons are, they are not down there in some rogue capacity; they are agents of US government policy.

The park’s anchor tenant is Sae-A, a South Korean garment company notorious & nearly run out of Guatemala on a rail for egregious labor violations, including violence against workers. They expect to pay workers $5 a day to make clothes for stores like Walmart & the Gap. In fact, Sae-A recently shipped its first order of Haitian-made garments to Walmart. They were persuaded to set up the sweatshop by walking into a ready-made factory with tax & tariff accommodations to make it super-profitable to them. Sean Penn, the willing stooge of US colonialism in Haiti, lauds Sae-A for their “maverick nature” but sycophants like him can’t distinguish the antisocial from the maverick. The only other tenant so far is Peintures Caraïbes, a Haitian paint manufacturer, who expects to hire 300 workers max. Their presence is a gesture to cover the colonialism of the whole project.