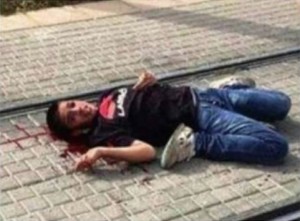 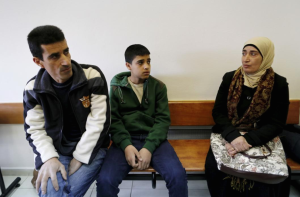 Israeli malfeasance around the case of Ahmed Manasra could keep a fleet of human rights lawyers busy for years. He was a 13-year-old kid when Israel escalated its provocations at al-Aqsa mosque in East Jerusalem last fall & turned occupied East Jerusalem into a martial law zone.

Israeli police shot him after they saw Israeli settlers from an illegal settlement in East Jerusalem chasing him for allegedly stabbing a settler (Oct. 12th). His case became famous because videos of his shooting by police circulated on social media. The videos showed him with legs splayed, profusely bleeding, reaching out for help, while Israeli settlers stood around shouting obscenities at him & urging police to do him in. An Israeli police officer actually kicked him back down when he tried to raise his body. When the ambulance arrived, Israeli medics reportedly dawdled & prolonged the process of getting him to a hospital.

He was treated in a Jerusalem hospital for a broken skull & moved from there to a detention center. A Jerusalem court indicted him on October 30th on two counts of attempted murder because the two settlers he & his cousin attacked survived their wounds. His 15-year-old cousin Hassan Manasra was shot dead by police at the scene before a car ran over his body.

The police interrogation of young Ahmed in November was videotaped & also circulated on social media. Israeli police are seen screaming at him, verbally abusing him, pressuring him to confess. He is seen crying, hitting his head, & repeating “I do not remember.” Did the interrogators inform him of his rights? Did he know that under international & Israeli law he had the right to an attorney? Or do those rights not apply to Palestinian kids in occupied East Jerusalem?

But Israeli authorities weren’t through with him yet. They repeatedly delayed his trial so that it would take place after he turned fourteen in late January & could be tried as an adult where he could receive the maximum sentence of 20 years.

Ahmed’s defense attorney is Lea Tsemel, a remarkable Israeli woman who has defended Palestinian youth for decades & is a supporter of Palestinian rights. She told Al Jazeera, “The allegation against him is not that he stabbed anybody, but that he had the intention to kill. We will have to prove he did not have that intention, but rather to cause pain & frighten.”

Khaled Manasra, Ahmed’s uncle & the father of Hassan who was shot dead, told Al Jazeera, “Young people see what happens at the al-Aqsa Mosque, how [Israeli forces] beat Palestinians, ladies; they see Palestinians being killed, like what happened to the Dawabsheh family. In their minds, they think they can stop it.”

Palestinian Intifada in concert with massive international solidarity is the only thing that can stop it & that is exactly why Israel targets Palestinian youth for intimidation, incarceration without due process, torture in the gulag, summary execution.

The most powerful way to stand with Ahmed Manasra is to honor the economic, cultural, & academic boycott of Israel (BDS). Buy nothing with barcode beginning 729. And consider attending the solidarity march in Washington DC on March 20th.

(Photo on top is Ahmed Manasra as he laid presumably dying & being taunted; bottom photo is him with his father & aunt before a court session in Jerusalem on January 19th. His trial was delayed so he could be tried as an adult. Photo by Ammar Awad/TPX/Reuters)