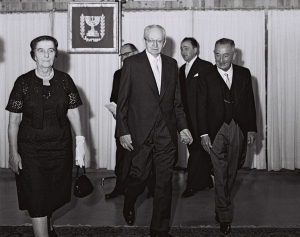 The importance of the Israeli Wolf Prize has to do with its direct relationship to the academic boycott of Israel. But another thing of importance about it is that it opens up the whole can of worms about Israel’s political relationship with Cuba because Ricardo Wolf who founded the Wolf Foundation which grants the prize was a former Cuban ambassador to Israel. Wolf was a German-born Jew & an inventor who emigrated to Cuba before the first World War & earned considerable wealth for his inventions used in steel manufacturing all over the world. He was a supporter of Fidel Castro & the Cuban revolution & was appointed by Castro to be the Cuban ambassador to Israel in 1960. After the 1967 Six-Day War, Cuba withstood pressure from several Arab countries to sever diplomatic ties with Israel but after the 1973 Yom Kippur War, Cuba, like many other countries, did eventually sever ties with Israel. Wolf then resigned his position & took up residence in Israel. He was a philanthropist & may very well have set up the Wolf Foundation from motives of largesse but he was also a committed Zionist & that ideology impacts the politics of the foundation.

Although uncritical apostles of Fidel Castro resent the question, it must be asked why he was so compromised about the colonization of Palestine by Zionist terrorists. It may have to do with ignorance on Castro’s part; it may have to do with his sense of solidarity being less political & more rooted in charity. Whatever the reason, it is deplorable since support for Palestinians against genocide is a touchstone for human rights activists & cannot be subject to political expedience.

In August 2015, the Obama administration reopened the American embassy in Havana, reestablished full diplomatic relations with Cuba, & lifted the embargo. The Israeli foreign ministry made overtures to Cuba through Canada & in 2016 Cuba invited an Israeli delegation for secret discussions. The election of Trump & his hardened attitude toward Cuba put a freeze on those negotiations. Israeli officials see resumption of diplomatic ties with Cuba as legitimizing & invaluable for fostering favorable public opinion towards Israel among Latin American liberals & leftists.

It’s deeply regrettable that Cuba does not stand four-square with Palestinians & in fact supports a bantustate (two-state) solution. In 2010, Castro even expressed his belief in the right of Israel to exist as a Jewish-only state. As a small, beleaguered country Cuba may not have the luxury of always standing on principles but in the case of Israeli apartheid & genocide against Palestinians, Cuba cannot be expedient any more than those who stand with Cuba against US overt & covert intervention. What’s the point of calling yourself socialist if you don’t take a stand against genocide?

This photo is Israel’s foreign minister Golda Meir & president Yitzhak Ben-Zvi with Cuban Ambassador Ricardo Wolf (on the far right) who is presenting his ambassador credentials to Jerusalem in1960.