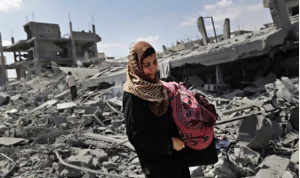 There was another controversy over Israel’s Wolf Prize concerning the 2004 recipient Daniel Barenboim, a Jewish Argentinian conductor & pianist. Barenboim provoked a furor in 2001 when he defied Israel’s informal ban on playing Wagner, an antisemite & the favorite composer of Hitler & the Nazis, by playing “Tristan und Isolde” as an encore at an Israeli festival. The Israeli president Moshe Katsav accused him of “cultural rape” for performing Wagner–showing that even before BDS was initiated in 2005, Israel knew a thing or two about cultural boycotts. The politics of the controversy in 2004 highlight the dramatic changes in Zionist politics caused by the betrayal of the Oslo Accords which elaborate the terms of Palestinian surrender & by the Palestinian call for BDS in 2005.

Barenboim performed for Israeli troops on the front lines in the 1967 Six-Day War, the 1973 Yom Kippur War, & the 1990 Gulf War when he & the orchestra performed in gas masks. In 1999, Barenboim & Palestinian scholar Edward Said jointly formed the West-Eastern Divan Orchestra, a youth orchestra based in Spain comprised of Israeli & Arab musicians to promote intercultural dialogue between Israel & the Palestinians. The problems of that concept would become fully manifest under the encroachments of the Oslo Accords, the blockade of Gaza, & with the initiation of BDS six years later because it posits a false symmetry between Israel & Palestinians & ignores the institutional character of Israeli occupation, apartheid, genocide. There is no moral parity between oppressor & oppressed, between Israel & Palestinians, as is more than evident from Israeli snipers shooting down unarmed protesters at the Great Return March. It was only a matter of time before the Divan Orchestra would come up against the cultural boycott of Israel & be viewed as too politically compromising. And it is probable Said, were he still alive, would have no part of such an apolitical, equivocal response to genocide.

Barenboim is a contradictory political person whose contradictions are absolutely intolerable today though left & liberal Zionism seemed progressive nearly 20 years ago before the Oslo Accords & the advent of BDS. Although born & resident in Argentina, he took out dual citizenship in Israel & Palestine to promote his support for a bantustate (two-state) solution for Palestinians. He used that dual citizenship in a grotesque way during Israel’s seven-week carpet bombing of Gaza in 2014 by speaking in a public statement both as a Palestinian & an Israeli. It was titled “Both Israelis & Palestinians are losers in this conflict.” He did not condemn Israel for the genocidal bombing campaign but took that moral parity thing to its logical dead-end by criticizing both Palestinians & Israel for equal parts of violence. Where Barenboim was hailed & vilified as a supporter of Palestinians before 2004, his equivocations on BDS & support for a cloistered, Jewish-only state bordered by a Palestinian bantustate put him on the side of Israel. It effectively disarms Palestinians politically so that they must be passive in the advance of genocide. There is no moral parity when Palestinians are under seven weeks of carpet bombing & Israelis are sitting in easy chairs sucking down beers watching Gaza be blown to smithereens.

It’s good that Barenboim, like Natalie Portman, is compassionate toward Palestinians & opposes the extremes of Israeli violence against them. But pity will do nothing to stop the genocide. The photo is a scene from Gaza on July 24th, 2014, just two days before Barenboim issued his statement speaking as both a Palestinian & an Israeli which called the violence two-sided.