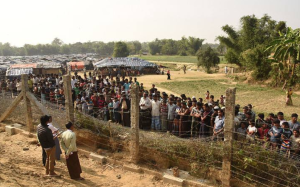 Just so we’re clear who’s behind the forced deportation of Rohingya refugees: the civilian government headed by Aung San Suu Kyi who negotiated & signed the repatriation agreement between Burma & Bangladesh last November. It is Win Myat Aye, the cabinet Minister of Social Welfare, & Resettlement, who is reporting about the construction of concentration camps, meeting with Bangladeshi officials to work out logistics, coordinating Burmese government preparations for deportations.

It is a remarkable political disconnect that those regarded as experts continue to make distinctions between the civilian government & the military junta. They are of a piece, with Suu Kyi sitting on the leading bodies of military rule. They are integrated, not separate entities. There is no dual power in Burma.

This photo was released by the Burmese Ministry of Information, also a civilian cabinet post, saying a political official in Arakan state is explaining the repatriation agreement & process of citizenship to “repatriated” Rohingya refugees. The nationalist hatred of the Rohingya people is so deranged that they must not grasp how this photo appears to those who don’t share their animosity.

Stand with the Rohingya people in demanding no forced deportations & full refugee rights anywhere they want in the world.