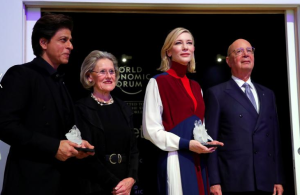 Busted! One of the Bollywood Khans was too busy packing for his trip to the World Economic Forum in Davos, Switzerland to attend the Hindutva meets Zionist selfie event with the Netanyahus in India. Shah Rukh Khan & Cate Blanchett were in Davos to pick up some meaningless award from Klaus & Hilde Schwab. Klaus Schwab is the founder of the World Economic Forum, the recipient of a $1 million prize from the state of Israel in 2004, the man who feted now deceased Israeli president Shimon Peres as the “Spirit of Davos” in 2014, & an outspoken opponent of the economic & cultural boycott of Israel.

And that settles that about where the Bollywood Khans stand on Palestinians.