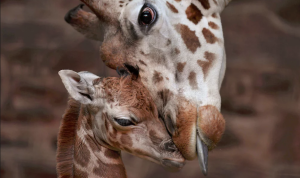 This is a mother Rothschild’s giraffe with her newborn calf in the city zoo of Chester, UK. Is it anthropomorphizing to see love here? It was common not that long ago to think animals had no emotional life & those who recognized emotions in animals were accused of projecting our own emotions on to them.

Animals lovers consider that accusation peculiar & think only the most obtuse observer of animals could hold such a view. But the human capacity to deny animals emotional & social lives speaks profoundly to the cognitive disorders involved in racism & misogyny.
Rothschild’s giraffes (also known as the Baringo giraffe or as the Ugandan giraffe) were renamed after a member of the banking family who founded the Walter Rothschild Zoological Museum at Tring UK in 1889. It was originally his private collection of stuffed mammals, birds, reptiles, insects. It is now renamed the Natural History Museum.

That was the era when anthropology museums were being established in the US & Europe to house not only stuffed animals but also, in many of the museums, the booty & artifacts from colonial expeditions of what were considered “primitive” tribal societies going extinct. In every way those museums highlight that “othering” phenomenon inherent to colonialism, the steadfast determination not to see other societies as human. Racism is not inherent but was invented to justify colonialism. If one can’t see the humanity of other humans one certainly won’t see emotional lives in animals. Natural history museums were part of constructing the ideology of superior & inferior beings & of white supremacy.

These Baringo or Ugandan giraffes are among the most endangered species of giraffes with only an estimated 1,500 left in the savannas of Uganda & Kenya. There are breeding programs for them in Kenya & in registered zoos around the world. Apparently the Chester city zoo is one of them.

Zoo keepers have the same ideological ancestry as keepers of anthropology museums. It is impossible for animal lovers to visit zoos except to investigate the abusive treatment of animals, especially giraffes, gorillas, & the big cats.