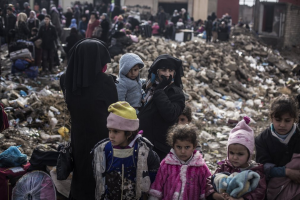 The Syrian & Russian offensive against east Aleppo is concurrent with the US-NATO offensive against ISIS in Mosul, Iraq. Because so much of US military strategy & operations in Syria & Iraq are secret or intentionally obfuscated, media sources conflict about the details but there is a considerable amount that can be known.

US Pentagon officials reported in October 2015 that there are between 3,000 to 5,000 ISIS fighters in the Mosul metropolitan area & that the total forces fighting ISIS numbered 108,500: 54,000 Iraqi troops; 40,000 Kurdish Peshmerga fighters; 14,000 paramilitaries forces; & 500 US special forces. No admission of how many US mercenaries are deployed when we know that in Afghanistan & Iraq, mercenaries have often outnumbered US soldiers & are not included in troop totals.

The problem with all the carefully planned & coordinated military operations is the massive bombing of a city with at least a million civilians & no coordination about what to do with the tens of thousands fleeing for their lives. In less than three months, it is estimated that nearly 125,000 have fled Mosul. US officials say the offensive is going to last many months more.

Thousands from Mosul who fled across the Syrian border to a refugee camp in al-Hol are now being forced back by the Iraqi government. To what? The UN refugee agency (UNHCR) reports they have only constructed six refugee camps with the capacity to house about 9,000 families & are building three more camps to house an additional 5,000 families. They also admit to a severe shortage of supplies for the camps like food, water, & medical care. Aid workers report children are expressing signs of severe war trauma, including uncontrollable crying, bed-wetting, mutism, & separation anxiety.

Thousands still have no place to go for shelter in the middle of winter with temperatures in the region of 9℃ (48 °F). When US-NATO planned & launched the offensive on ISIS in Mosul, were civilians no part of their considerations? The question is banal: of course they weren’t.

These women & children are among the nearly 125,000 civilians from Mosul displaced since October. They are at what looks like a dumpsite in Bartella, Iraq, about 30 km/19 mi from Mosul. The numbers of Iraqi civilian casualties are not available. They never are in US wars.

Before the Saudi-US-UK coalition began bombing Yemen in March 2015, thousands of war refugees from Somalia sought asylum there from US bombing. After the bombing began in Yemen, thousands of Somalis, Yemenis, & other African refugees went fleeing back to Somalia. Consider the surreality of that & of Iraqi war refugees fleeing to Syria which nearly 5 million war refugees have fled. The barbaric phase of capitalism has made the world a killing field, an Armageddon.

In response, the only principled antiwar demands are the immediate cessation of bombing in Iraq & Syria; the immediate, unconditional withdrawal of all foreign military forces from Iraq & Syria.