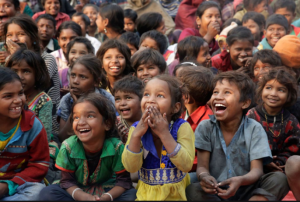 It would be great to post this photo of little kids in Allahabad, India just because they are so damn cute & the photo delightful to look at. But the caption said they are dirt poor kids attending a performance against child labor.

Why they were doing the performance for the kids rather than government officials & sweatshop owners wasn’t explained. But they did note that an estimated 13 million Indian kids work despite its illegality.

Worldwide, a staggering 215 million kids work, mostly full-time & in the most dangerous conditions, including in the US & Europe. In the US in 2013, attempts to enact protective laws for small children farmworkers working with livestock, dangerous tools, hazardous chemicals were quashed by the Obama administration.

Child labor is central to neoliberal capitalist economic policies because kids are an easily controlled workforce but primarily because it undercuts adult organized labor.

Child labor is an abomination & a scourge that must be opposed & eliminated. It’s the least we owe our children.