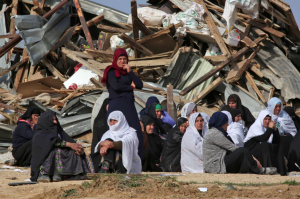 Palestinian Bedouin women sit next to the ruins of their dwellings demolished today by Israeli bulldozers in Umm Al-Hiran, a village in Israel’s southern Negev Desert.

This is the violent end to 13 years of an exhausting legal battle between the state of Israel & the Bedouin residents who had been evicted from the lands they lived on in 1948 when Israel colonized Palestine & their lands given to a kibbutz as farmland.

Israel has been trying to evict the residents & relocate them to build a Jewish settlement on the site but residents are unwilling to move & have been litigating & protesting it with help from Israeli human rights groups & activists. As a result, the final eviction has been repeatedly delayed. But this morning at 5 am, hundreds of police armed with tear gas, sponge-tipped bullets, & live ammo entered the village & began threatening & pushing people around.

Photojournalism shows several officers ganging up on one resident & other bloodied residents pinned to the ground by officers. Within hours bulldozers & demolition equipment moved in & began razing the village.

Before the day was over, police had shot & killed one resident which they justified by saying he had connections to ISIS. They claimed Yaqub Musa Abu Qi’an drove his vehicle into a policeman & killed him. Residents said Qi’an hit the officer when he lost control of the car after being shot by police.

The Palestinian BDS National Committee has launched a drive to expand in 2017 based on the impressive gains made in 2016. That is the way everyone can stand with those being displaced not just within the illegal boundary of Israel but in the West Bank & Gaza.