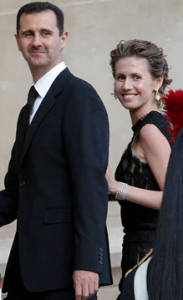 Asma Al-Assad is so classy, so Euro that she’d fit right in to London or New York socialite circles. Her & Bashar make such an adorable couple & they’re so in love. How could anyone say mean things about them?

It took a few weeks of adjustment, but now torturing dissidents, hanging them, & bombing civilians isn’t unnerving if they stay on their medications & only talk about revolutionists as jihadi head-choppers. All the adulation from libertarians around the world, the memes from Tim Anderson, the videos from Syrian Girl, the support of old CIA & FBI agents, really help with the psycho stuff. Even Tariq Ali, Robert Fisk, Seymour Hersh, Patrick Cockburn are in their corner now.

What could go wrong?