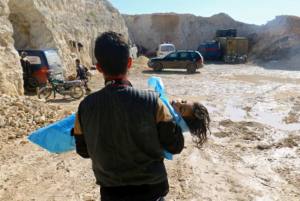 There’s no point in my attempting a scientific rebuttal to Theodore Postol, the retired MIT professor who claims Assad did not use sarin gas on civilians in August 2013 or on April 4th, 2017, but that civilians on the ground gassed themselves. The guy knows physics, nuclear engineering, neutrons, molecular dynamics, anti-ballistic missile systems, & other stuff like that. You can’t take him down with scientific rebuttals if you flunked Physics 101.

Of course the Assadists & libertarians passing the guy’s articles around explaining how Assad couldn’t have done it don’t know any more science than I do. They’re just clinging for dear life to a guy with credentials so their claims that the attack never happened or that White Helmets murdered their own children to make a “snuff movie of dead kids” will seem less deranged.

Nuclear physics & anti-ballistic missile systems aren’t my forte but political investigation is so I’m gonna take a go at the old boy my way. We can dispense with journalist apologists for Assad like Seymour Hersh who deny the gassing; he doesn’t know much about politics anymore, let alone physics. My first encounter with Hersh was with antiwar activists reaming him in Minneapolis in 1970 when he tried to blame the My Lai massacre entirely on Lt. Calley’s psychology & excluded the US government from his indictment.

Postol’s most authoritative allies include Veteran Intelligence Professionals for Sanity (VIPS), a small US group of retired CIA agents, FBI agents, military officers, & US diplomats, including Ray McGovern, Ann Wright, Coleen Rowley who now presume authority & leadership of the US antiwar movement. Their leadership explains why the antiwar movement is lilliputian, libertarian, pro-Assad’s dictatorship, & why no sane people want to associate with it.

It may be time to interrogate why so many spies & military officials are playing principled antiwar advocates. That’s a new one for me in 51 years of antiwar activism. Why the hell did the antiwar movement, even in its weakened state, give such disreputable people authority & a platform to peddle their libertarian approach to politics? Of course they oppose the Syrian revolution; for heaven’s sakes, they conducted US wars against revolutions & spied on antiwar & other political activists for all their working lives. If they’re sincere in their post-retirement transubstantiation to rebels, they should learn to take the bleachers like every new activist to listen & learn & stop pretending they have something to teach. If they don’t come clean on what they did as spies & generals, who can trust them anyway?

One of Postol’s longtime champions is David Icke who’s been publishing the guy’s rubbish since 2013. Who knows? Maybe their association began with Postol’s conversion to Icke’s ideology of obscurantism, anti-papism, obsessions with Lucifer, reptilian Jewish bankers & the Illuminati. The writer Alice Walker seemed sane until we knew she went along with all this crap.

Our man Postol isn’t leaving any paper trails back to David Icke but his association & collaboration with Syrian Girl, an outspoken disciple of Icke, doesn’t do his scientific credentials any service. Just because you have a PhD in physics doesn’t mean you haven’t lost your marbles some where along the way. David Duke has a PhD. So do Henry Kissinger & Madeleine Albright.

This photo is a man carrying the body of a child after Assad’s sarin gas attack in Khan Sheikhoun, April 4, 2017. If there are any authorities about who gassed civilians, let the civilian survivors speak & denounce Assad.