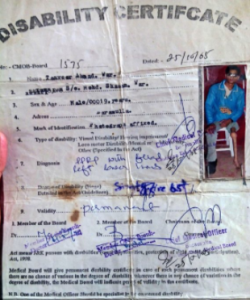 Last October 21st, government forces arrested 29-year-old Tanveer Ahmad War in Baramulla district, about 34 miles (54 km) from Srinagar after an FIR had been filed against him with the police.

An FIR is a criminal complaint lodged by a victim or material witness to a crime. The police can only register the FIR, arrest & initiate criminal proceedings against the accused for a “cognizable offense” like rape, murder, theft, kidnapping, or assault. He was granted bail by the court on that charge but not released because another FIR had been filed against him. On December 8th, the court ordered him released on bail on the second charge & again he was not released.

In an illegal move similar to what they pulled on Khurram Parvez, police moved him to a jail in Kupwara district, about 22 miles (36 km) from Baramulla, & detained him under the Public Safety Act (PSA). PSA is an outrageous legal maneuver to legitimize repression & occupation. It is used by Israel against Palestinians, including children, & was used in apartheid South Africa. It allows the government to indefinitely detain activists on vague charges like endangering the security of the state or public disorder. In the case of Tanveer Ahmad War, it allows the courts to dodge criminal allegations which are almost certainly fabricated. You wouldn’t hold a man on an unspecified charge of public disorder if you could nail him for rape, murder, or another serious felony.

Tanveer’s wife & family are aggressively hounding authorities to get him released because it’s a travesty of justice & as an amputee with multiple ailments, his health is jeopardized by incarceration. According to documents his family obtained from the court in Baramulla, he is accused of “vitiating the peaceful atmosphere & creating unrest that will ultimately lead to increasing violence” & for “carrying out antisocial activities.”

What happened to the felony charges? Well the Baramulla magistrate claimed Tanveer used his motorized tricycle provided by the government as an assault weapon to ‘advocate secessionist ideology & actively disturb the public order.’ When the magistrate completes his court tenure he should consider a second career in stand-up comedy or writing propaganda for Assad.

It isn’t shocking that a disabled activist would be arrested & detained since disability rights activists have defied marginalization & played prominent roles in the Arab Spring, in anti-austerity protests across Europe, & in the Occupy movement. They’re in the thick of things. The concern of his wife & family is the illegality of his detention & that he receive proper medical attention in prison.

According to Human Rights Watch, authorities in Kashmir detained over 400 activists, including children, between July 9th & October 6th of 2016.

End the occupation. End the PSA. Self-determination for Kashmir.