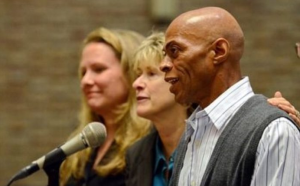 There was a TV show about the extraordinary case of Edward Lee Elmore, a 23-year-old man arrested in 1982 in Greenwood, South Carolina for the rape & murder of a wealthy 75-year-old woman. Elmore was Black, a high-school dropout, had a learning disability, & was one of 11 kids from a poor family.

Elmore’s only connection to her was that he’d washed windows for her a couple weeks before the murder. He was fingered to the police by the most likely perpetrator, a neighbor romantically involved with the victim, the first person on the scene of the crime, & as a white city councilman a person with high social standing relative to Elmore.

Framed up with planted evidence, Elmore was given court-appointed lawyers, & sustained massive prosecutorial misconduct. He was given the death sentence & spent 30 years in prison, 29 of them on death row. In 2010 he was taken off death row when his legal team successfully argued he was not eligible for execution as a person with learning disabilities (what the court calls “mental retardation,” a term rejected as derogatory by those with disability) in accordance with a US Supreme Court decision.

The only reason Elmore’s case became prominent & that he was eventually released is because in 1993 a law school student named Diana Holt reviewed his case & became convinced he was innocent. She had herself spent time in jail for armed robbery & became a jail house lawyer. When she got out she went to law school after encouragement by a prosecutor who admired her work.

Holt was dogged & committed to the Elmore case & described the misogynist bullying the prosecution subjected her to, especially over her own criminal past as a 17-year-old runaway. She’s tough. She stood up to it. Over the next several years she got the Cornell Death Penalty Project involved in Elmore’s defense & together they litigated despite several legal setbacks until Elmore was released in 2012. He was 53 years-old.

To show the scope of prosecutorial malice, even after years of legal procedures showing Elmore could not have committed the crime, the state of South Carolina refused to exonerate him & he was released on an Alford Plea where the state claims there is evidence against him but they are unable to prove his guilt.

Photo is Edward Lee Elmore with Diana Holt next to him at his release.