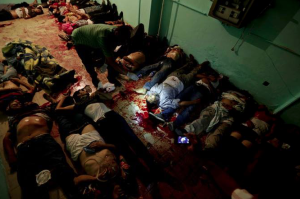 It was in July & August 2013, after the overthrow of President Morsi, that Egyptian general Abdel Al-Sisi began brutal, terrifying massacres against the Muslim Brotherhood (MB), a conservative fundamentalist group that played almost no role in the overthrow of Mubarak but came to prominence under Morsi who was an elite MB member. I had written volumes criticizing the Morsi regime & the rightwing role of the MB in street violence during the Egyptian uprising, even excoriating the Morsi constitution as a military-religious tract.

But when the junta went after MB activsts & began slaughtering them, simply mowing them down with machine guns, I began a vigorous defense of them. First because that is not how how human beings who dissent from political power should be treated & second because the slaughter was to legitimize an all-out, eventual assault on the entire Egyptian popular movement which in their millions had overthrown Mubarak in 2011.

For defending the MB, I received an avalanche of abuse from FB friends & had to bounce several just for the abusive & vituperative character of their disagreement–similar to the woman who just called me an “orientalist sow” for opposing US military intervention in Syria. Some expressed agreement, even enthusiasm for the violent assaults on the MB–as if Al-Sisi was clearing out vermin & not slaughtering hundreds of human beings.

One does not have to agree with the politics of the MB–& I most decidedly did not–but they had a right to hold their views. They didn’t have a right to forcibly impose them on others, as they tried to do under Morsi, but neither did the military have a right to slaughter them after Morsi was out of power. Especially because at no point, under Mubarak, Morsi, or Al-Sisi was the military junta never not in control of the government. They had pulled a fast one on the popular revolution.

Ordinarily I avoid posting gruesome photos because the political affect is demoralizing. But we need to look the massacre of the MB activists straight in the face. The partisans lying dead in this photo were fired on as they staged a sit-in outside the Republican Guard building in Cairo where they believed Morsi & other arrested MB members were being detained. This is how the Al-Sisi regime continues to handle dissent & it is criminal no matter what we think of MB political ideology. According to Amnesty International, about 41,000 people had been disappeared in the first two years of Al-Sisi’s rule & thousands killed during the suppression of protests, strikes & by the death sentence.

This comes to mind because Usman A Khan Tahir has written this important piece about the massacres for Pakistan Today. I have almost no agreement on Syria with Sam Charles Hamad who is cited in the article but consider his insights on these massacres to be quite cogent.