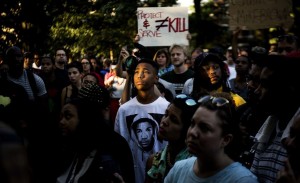 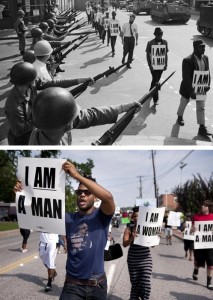 Memphis 1968 & Ferguson 2014: activists march in defiance of the Ferguson police description of the Black community as “fucking animals” with a simple, declaration of their humanity.

The defiance remains the same but the difference between the police force in Memphis 1968 & Ferguson 2014 could not be more dramatic & alarming. The Memphis cops are dressed like Barney Fife, though they used water cannons, attack dogs, mounted police, tear gas, & truncheons against protesters. Today the Pentagon is arming local police departments with military swag & Ferguson cops are dressed in camouflage gear & armed to the teeth with tear gas, rubber bullets, automatic weapons, handguns, combat armored vehicles, night vision equipment, military-grade assault rifles–like they’re going to storm the beach at Normandy.

Media is referring to Ferguson as a “war zone” & comparing it to Egypt & Iraq but inflammatory rhetoric is nothing new. To justify deployment of SWAT teams in the Black community beginning in the 1980s combat metaphors have been rampant in media including terms like “narco-terrorists”, “Beirut, USA”, “civil war zones”, & “regions under siege”.

The Civil Rights Movement in the 1960s & the anti-Vietnam War movement challenged police violence against unarmed protesters; those social movements numbering in the millions finally won the right of peaceful assembly which is in the Bill of Rights but not respected by police departments. Since the 1999 WTO protests in Seattle, police departments around the US have reintroduced storm-trooper tactics against peaceful protesters & they come to the tamest protests loaded for bear (& clearly all souped up on steroids). Increased militarization & aggression by police was evident against the Occupy movement in 2011.

There was a prison revolt in Attica New York in 1971 against brutal, dehumanizing treatment & conditions in the prison. The defiance of the male prisoners was dignified–they wanted justice, not vengeance. Their statement is evocative of Ferguson & a mantra for all the oppressed whose humanity is denied: “We are men! We are not beasts & do not intend to be beaten or driven as such. The entire prison populace has set forth to change forever the ruthless brutalization & disregard for the lives of the prisoners here & throughout the US. What has happened here is but the sound before the fury of those who are oppressed.” (This electrifying defiance was spoken by Elliot L.D. Barkley, a 21-year-old spokesperson for the prisoners who was murdered by the NY state police after the prisoners surrendered. According to witnesses, state troopers searched him out & shot him in the back.)

It’s clear from history that “an injury to one is an injury to all” is an iron law of social transformation. We’re all in this together from Gaza to Ferguson; from civil rights to women’s rights. The Pentagon can arm Israel & the Ferguson cops to the teeth but against the mighty force of international solidarity, tyranny doesn’t stand a chance. We have to win the streets back & regain our right to protest without police violence. The Ferguson Black community has released the first volley of that historic struggle.