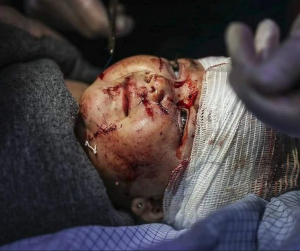 It was estimated in July 2017 by the Syrian Observatory for Human Rights that nearly 20,000 children had been killed by Assad forces since 2011. Other estimates are as high as 50,000 children. That doesn’t include the several hundred children arrested, tortured, & murdered in Assad’s prisons or at schools used as detention centers. According to Syrian & international human rights groups, children have been targeted by Syrian & Russian forces. Since this mass murder is in the interest of Assad’s national sovereignty, it’s likely that when the debased antiwar movement led by ‘retired’ CIA, FBI, & former US military officers explain that to the families, they will understand the slaughter of their children is for the better good. When debased socialists come in with their Lenin quotes justifying Assad’s dictatorship, that will more than persuade those grieving parents that ‘all is well is this best of all possible worlds’.

The only principled demands are that Syria, Russia, & the US-coalition cease the bombing of civilians & for the immediate, unconditional withdrawal of all foreign military operations from Syria.