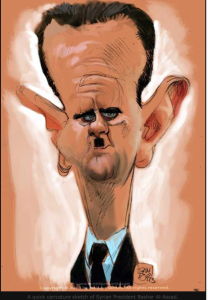 Syrian Girl & Coleen Rowley have now teamed up to defend Assad against his accusers. Hold on to your seats; this is gonna be a bumpy ride. Until yesterday Rowley was a stodgy defender of Trump but how can she maintain that & hold her own with the irascible Syrian Girl who stopped supporting Trump last week? So she’s blaming the White Helmets for misleading Trump with the same moral nonchalance she used to accuse me of using a weapon of mass destruction.

As Assadism spirals into a political crisis for indifference to the gassing of civilians but furor over empty airplane hangars, the moral bankruptcy & stinking mendacity of their politics are laid bare & none will more effectively demonstrate that than this regrettable tag team of groveling apologists for dictatorship.

Marx said history repeats itself. First as tragedy, then as farce. Their defense of Assad will render the distinctions meaningless. Momma mia, but would I love to see their show.