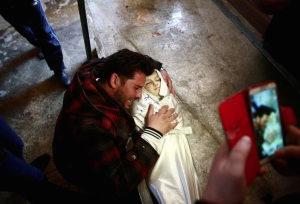 While the Hands Off Syria Coalition was out in force over the bombing of a couple airport hangars, this young father Salah Skaff was mourning the death of his baby girl Amira killed in a Syrian airstrike over Douma. Several other cities were also bombed with casualties & serious injuries in every one.

You can feign outrage over dead airport hangars (which are back in action today for further bombing missions) but you cannot fake this kind of grief nor the trauma of baby Omran in Aleppo.

Rebuild the international antiwar movement to demand Syria stop the bombing of civilians & the immediate, unconditional withdrawal of US, Russian, Iranian, & all foreign military forces from Syria.

We can never compensate Salah & Amira Skaff & all who have paid such a price for the epic failure of international solidarity but we can begin to do the right thing for those still fighting against dictatorship.