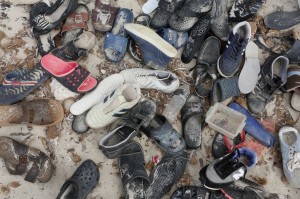 These shoes are described as “discarded” on the shores of Libya where bodies of refugees & immigrants continue to wash ashore from a capsize two weeks ago. The shoes of course were not discarded but washed ashore from those who drowned in the capsize.

CBS news showed footage yesterday of refugees on dinghies in the Aegean Sea attacked by masked men in speed boats who disabled the dinghies to endanger the lives of those aboard. The news crew reported seeing this done to five boats of refugees. When they asked the Greek coast guard about the incidents, the coast guard declined to deny or admit its involvement.

When you contrast the promises of the SYRIZA regime for a more humane immigration policy & its open borders policy for several months to the re-imposition of EU/Frontex policies, it becomes clear that the common denominator in barbarism against refugees & in austerity policies against Greek working people is the European Union. It’s digging its own grave–but it’s not shoveling fast enough. We need to help bury it.

It has to be said outright that the nearly 3,000 who have drowned just this year–including small children like baby Aylan Kurdi & those who were elderly or infirm–died as a direct result of EU policy & never had to lose their lives. It wasn’t written in the stars & it can’t just be blamed on traffickers sending people who can’t swim out in rickety boats without life vests. Once again, Europe has 26 navies prowling the Mediterranean Sea. They should have one mission & one mission only: to intercept those dinghies & floating death traps to rescue refugees from drowning & transport them to Italy. Don’t even try to tell us they’re too busy with other duties. With over 26 warships cruising the Mediterranean there must be a traffic jam out there.

One heartening thing is that the refugees aren’t going down passively. Not only are they knocking down razor wire fences & pushing through police cordons on their way north, but they are protesting in Greece against the desultory processing of immigration papers by Greek authorities. We need to add our voices to theirs demanding the EU cease its anti-refugee intrigues & open the damn borders.

This is a very poignant & powerful image. The shoes represent human beings, mothers, fathers, sisters, brothers, daughters, sons–all with dreams, hopes, fears, needs. They were our brothers & sisters. May they Rest in Peace. And may we proceed in power to demand immigration as a human right.