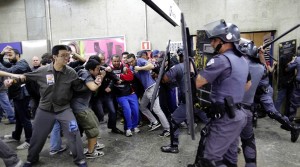 This is an ironic case of “chickens coming home to roost.” Much more aptly, it’s an exercise of the most powerful weapon working people have in their arsenal: the right to strike. The irony is that in June 2013, millions of Brazilians were provoked to massive opposition against neoliberal austerity policies by a hike in public transportation fees.

Now, less than a week before the opening game of the World Cup (next Weds., June 12th) at Itaquerao stadium in San Paulo, Brazil, subway train operators are entering the second day of a strike, jeopardizing the only means most soccer fans will have of getting to the stadium. The 70,000 fans expected for the opener will be all dressed up with no way to go. It don’t get better than that!

Construction on the $431 million stadium was scheduled for completion December 31st, 2013 but the roof is still not complete & won’t be done until after the games end. Serious irregularities found in construction of an entire seating section for 20,000 mean fire officials will not release approval permits.

That stadium is looking more & more like a white elephant but even more like a dreadful safety hazard. Those sports fans who can’t book a limo to replace the subway may thank their lucky stars they couldn’t get to the place due to the strike.

Meanwhile demonstrations in twelve cities across Brazil, including near the Itaquerao stadium, continue to protest the billions spent to host the games & demand funding to improve education, health care, social services, affordable housing & transportation. Hopefully this goes way beyond “chickens coming home to roost” to a general uprising against neoliberal plunder & “bread & circuses” for the ruling rich.

In this photo riot cops are battling it out with striking subway drivers but when all is said & done, next Wednesday they need someone to drive those trains. Power is a relative thing.