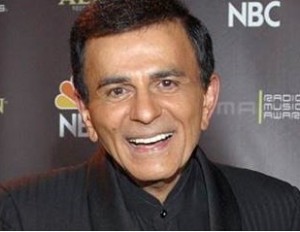 Usually I don’t comment on the passing of celebrities so much as I ridicule celebrity culture. But it’s being reported that Casey Kasem, the long-time radio host of “American Top 40”, suffers dementia, is in critical condition & that his family is engaged in an unseemly dispute over his care.

The one thing media won’t mention about Kasem (of Lebanese ancestry & raised in Detroit) is that he was an antiwar activist, especially prominent against the first Iraq War. I’m unable to find links to confirm my memory but Kasem played a role in promoting & financing “The Fire This Time: US War Crimes in the Gulf” by Ramsey Clark which is about the first Gulf War in 1991.

He also spoke at antiwar protests in Washington, DC & elsewhere to oppose the Gulf War. I have listened to hundreds of antiwar speeches (& given them) in my lifetime but one speech by Kasem always stood out to me for its power. It wasn’t just my surprise that a man famous for being a rock & roll DJ could be so powerfully opposed to war but that he could express our anger with such eloquence & without an ounce of pretension.

I hope Mr. Kasem recovers, though at 82 & in bad health that’s unlikely. But his eulogies should not be written without honoring his role in antiwar opposition. The first Gulf War was a turning point in the US antiwar movement, signaling a decline in massive participation, due in part to the barbarity of the military onslaught against Iraq. Mr. Kasem was not daunted & for that we tip our hats to him.