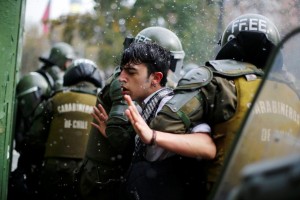 There has been scant coverage of student protests over education in Chile, maybe because they’re now in their tenth year. Millions of high school & college students as well as teachers have protested since 2011, often in aggressive battles with riot police over the very right to protest. The protester here was arrested on Tuesday during a “reflexive strike of students” called by Chilean student federations making the demands for education reforms that go back a decade.

The education system, which had been universal, free, & public, was privatized & deregulated under the 1974 coup & dictatorship of General Augusto Pinochet when Chile became the testing ground for Kissinger & Milton Friedman’s antisocial, scorched earth neoliberal assaults on social & public services. Education became a consumer product, no longer a social right. Those policies remain in place, administered by successive “democratic” regimes after Pinochet.

The protests include tens of thousands of high school students because public education is being replaced by charter schools, a neoliberal method to undermine & destroy public education. Billions of dollars have gone to private schools while public education collapses, especially for working class students.

Education for profit is the norm & in the past decade university tuition has increased 60 percent so that Chilean universities & technical schools are now among the most expensive in the world. Working class kids can no longer afford higher education.

Protesters want education brought under control of the central government rather than by municipalities. Municipalizing education was a neoliberal strategy & created wide inequalities in education based on unequal funding resources–not unlike segregated education in the US. In fact, one Chilean NGO termed the system “educational apartheid,” among the most unequal education systems in the world.

The current Chilean president Michelle Bachelet is a socialist of the Bernie Sanders/French president François Hollande kind. She was elected in 2014 based on promises of education reform which she didn’t deliver in her first term of office from 2006-2010. In the same way as Hillary Clinton & Sanders, Bachelet played the populist role to the hilt during the election campaign, even promising to trim the sails of neoliberalism. She promised to re-centralize education, make it free again, & financed by corporate taxes.

In February 2015, Bachelet enacted an education reform law full of loopholes, stalling tactics, promises for future programs to correct the problems not addressed. What the legislation doesn’t do is dismantle neoliberal education & replace it with free, universal public education.

Some commentators called the legislation a partial victory in a gradualist approach that shows how popular movements can gradually transform state policy & they elaborated how difficult it is to dismantle the neoliberal model of education. It wasn’t difficult to install the model under Pinochet’s dictatorship so why does dismantling it have to be gradual?

Sometimes social movements do have to accept partial victories; In fact, that’s the norm. But one should not look at a piece of legislation meant to deceive & demobilize the social movement of students & teachers & call it a partial victory when it’s a massive con job.

Student protests against neoliberal education policies are going on in several Latin American countries, not to mention in the US & elsewhere, because they are a weapon of mass destruction lobbed at public education. Universal, free, public education (introduced in the US by Black politicians during Reconstruction in the South) is one of the most important achievements of democratic societies.

Our fullest solidarity with the student & teacher movement in Chile against neoliberal education.